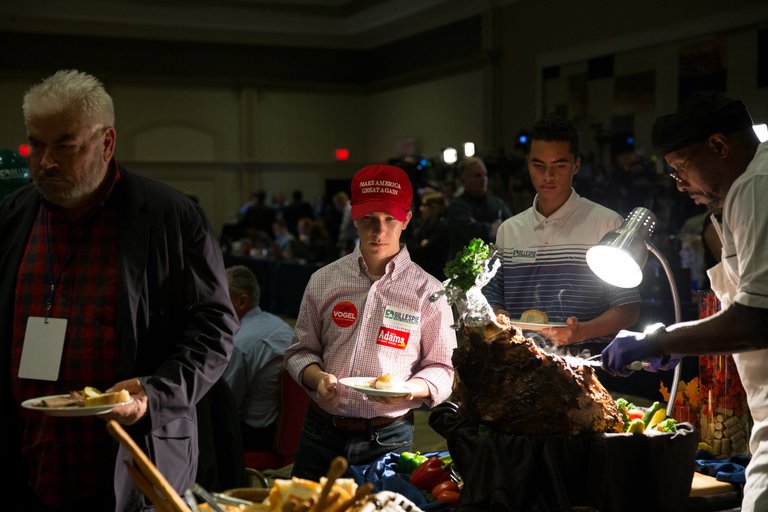 Supporters of Ed Gillespie, the Republican candidate for governor of Virginia, at his election night party on Tuesday in Richmond. President Trump’s brand of politics did not lead to a victory for Mr. Gillespie. Credit: Parker Michels-Boyce for The New York Times

RICHMOND, Va. — The American suburbs appear to be in revolt against President Trump after a muscular coalition of college-educated voters and racial and ethnic minorities dealt the Republican Party a thumping rejection on Tuesday and propelled a diverse class of Democrats into office.

From the tax-obsessed suburbs of New York City to high-tech neighborhoods outside Seattle to the sprawling, polyglot developments of Fairfax and Prince William County, Va., voters shunned Republicans up and down the ballot in off-year elections. Leaders in both parties said the elections were an unmistakable alarm bell for Republicans ahead of the 2018 campaign, when the party’s grip on the House of Representatives may hinge on the socially moderate, multiethnic communities near major cities.

“Voters are taking their anger out at the president, and the only way they can do that is by going after Republicans on the ballot,” said Representative Charlie Dent, Republican of Pennsylvania.

The Democrats’ gains signaled deep alienation from the Republican Party among the sort of upscale moderates who were once central to their coalition.

Democrats not only swept Virginia’s statewide races but neared a majority in the House of Delegates, a legislative chamber that was gerrymandered to make the Republican majority virtually unassailable. They seized county executive offices in Westchester and Nassau Counties, N.Y., and carried bellwether mayoral elections in St. Petersburg, Fla., and Manchester, N.H., all races that appeared to favor Republicans only months ago.

Even in the Deep South, Georgia Democrats captured two State House seats where they previously had not even fielded candidates while snatching a State Senate seat in Buckhead, an upscale area of Atlanta.

Chris Vance, a former chairman of the Washington State Republican Party, placed the blame squarely on Mr. Trump: “Among college-educated suburbanites, he is a pariah.”

Democrats still face formidable obstacles in the 2018 election, including some not at work in this week’s elections. If a suburban insurrection might help Democrats take the House, the Senate seats at stake next year are overwhelmingly in conservative, rural states, where feelings about Mr. Trump range from ambivalent to positive. So far, only two Republican Senate seats are clearly in play: the one in Arizona being vacated by Jeff Flake and Dean Heller’s in Nevada.

A transgender lawmaker in Virginia, a Sikh mayor in New Jersey and a refugee mayor in Montana were among Democrats’ victories in state and local elections. Was this a one-off rebuke of President Trump or a sign of what’s to come in next year’s midterms?
By CHRIS CIRILLO on Publish DateNovember 8, 2017. Photo by Bryan Anselm for The New York Times.

In House races, Democratic candidates are likely to face Republican attacks tying them to Representative Nancy Pelosi of California, the unpopular Democratic minority leader, and to liberal policies, like single-payer health care, that are causing divisions in the Democratic ranks.

But for Republicans, the bad news was not likely to end with Tuesday’s results.

Congressional Republicans on Wednesday were bracing for a new wave of retirements just one day after another pair of veteran House members, Representative Frank A. LoBiondo of New Jersey and Representative Ted Poe of Texas, declared they would not seek re-election. Already, 29 House Republicans have said they will not run again, while just seven Democrats have announced plans to retire.

Mr. Dent, channeling the exasperation of his colleagues, suggested an exodus might be imminent. “Do they really want to go through another year of this?” said Mr. Dent, a leader of his caucus’s moderate wing, who has announced he will not run again.

In the White House, electoral defeat gave way to a shifting series of explanations: Mr. Trump’s first reaction was to savage Ed Gillespie, the defeated Republican candidate for governor in Virginia, on Twitter. By Wednesday morning, two presidential advisers acknowledged antipathy toward Mr. Trump would probably drive Democratic turnout in 2018.

But by Wednesday afternoon, the story changed again: At a White House briefing, aides dismissed the importance of New Jersey and Virginia in either 2018 or 2020. One White House official blamed congressional Republicans, asserting that swing voters on Tuesday embraced Democrats because they were frustrated that lawmakers had not moved on the president’s agenda.

But some of the most competitive House races of the 2018 midterms will take place in the two states. In New Jersey, Republicans will struggle to retain Mr. LoBiondo’s seat and must protect such imperiled incumbents as Leonard Lance, Tom MacArthur and Rodney Frelinghuysen. In Virginia, the district of Representative Barbara Comstock, a Republican, went 56 percent to 43 percent for Lt. Gov. Ralph S. Northam, the Democrats’ triumphant candidate for governor. Mr. Northam also captured 51 percent of the votes in the district of Representative Scott Taylor, a freshman Republican from Virginia Beach.

Democrats were as buoyant as Republicans were dejected. Democratic Party leaders gleefully predicted that the Senate, where Republicans hold a two-seat majority, might now be in play, and they said their fund-raising and candidate recruitment would take off going into the new year.

“We’ll get a lot of candidates who are going to want to run, and I think for donors who have been on the sidelines, dispirited for the last year, I’m telling you, people are jazzed up,” said Gov. Terry McAuliffe of Virginia, the ever-upbeat former national Democratic Party chairman.

To many Democrats and some Republicans, Tuesday’s results recalled the last time an unpopular Republican was in the White House and voters vented their frustrations on a Republican-held Congress. In 2005, Democrats rolled to victory in Virginia and New Jersey, presaging an electoral wave in 2006 and inspiring throngs of Democrats to run for office in difficult districts. 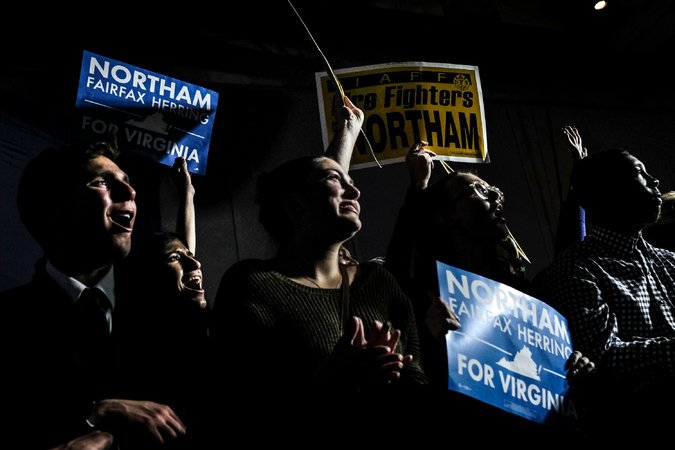 Supporters cheered for Lt. Gov. Ralph S. Northam on Tuesday night at his party in Fairfax after he was elected governor of Virginia. Credit: Gabriella Demczuk for The New York Times

Representative Ben Ray Luján of New Mexico, the chairman of the Democratic Congressional Campaign Committee, said he had spent Tuesday evening calling potential House candidates and urging them to watch the returns, telling them, “I just want to encourage you to turn on the television, if it’s not already on.”

“Democrats down there were very aggressive about expanding their map and recruiting strong candidates, even where they were told they couldn’t win,” Mr. Luján said of Virginia. “We’re going to make our Republican colleagues fight for every inch.”

In the Senate, too, Democrats are seeking to expand the map. Facing a narrow path to a majority, they are strenuously wooing Phil Bredesen, a former Tennessee governor, to run for the seat that Senator Bob Corker is vacating. Mr. Bredesen has been courted personally by Senator Chuck Schumer of New York, the minority leader, as well as several former governors who now serve in the Senate, including Mark Warner of Virginia, according to Democrats briefed on the overtures. And the Democratic Senatorial Campaign Committee commissioned a poll aimed at coaxing Mr. Bredesen to run.

Mr. Bredesen is in Washington this week for meetings and is said to be nearing a decision.

Democrats won Tuesday with a historically diverse slate of candidates: Having long struggled to bring diversity to the leadership tier of their party, they elected the first transgender legislator in the country, the first Vietnamese-American legislator in Virginia, the first African-American female mayor of Charlotte, N.C., and the first black statewide officer in Virginia in more than a quarter-century, among other groundbreaking candidates.

Kathy Tran, a Vietnamese-American who was elected to the House of Delegates in a Fairfax-based seat that Republicans previously held, said voters there had mobilized to rebuke Mr. Trump and his brand of politics. She urged national Democrats to follow Virginia’s example by recruiting candidates from many backgrounds for the midterms.

“This was a clear rejection of racism and bigotry and hateful violence,” Ms. Tran said of the elections.

County-level results captured the dizzying scale of the lurch away from Republicans: In Virginia, Mr. Northam captured outer Washington suburbs, including Prince William and Loudoun Counties, by 20 percentage points or more, where other Democrats prevailed by single digits in the recent past. He won Virginia Beach, an area Mr. Trump carried last year, by five percentage points.

In New Jersey, Mr. Murphy carried the densely populated New York and Philadelphia suburbs by staggering margins, including counties that broke for Gov. Chris Christie, a Republican, eight years ago. And in Delaware County, Pa., long home to a fearsome Republican machine, Democrats won seats on the county council for the first time since the 1970s thanks to a local campaign that featured yard signs that got straight to the point: “Vote Nov. 7th Against Trump.”

“The enthusiastic left showed up tonight in big numbers,” he said, “and really determined the outcome of the election.”